This article addresses key areas for consideration when redeveloping flats in typical central London mansion blocks. By ‘mansion block’ we are referring to purpose built (often at the turn of the 20th century) blocks of flats. However, many of these considerations would also apply to conversions of period houses to flats. 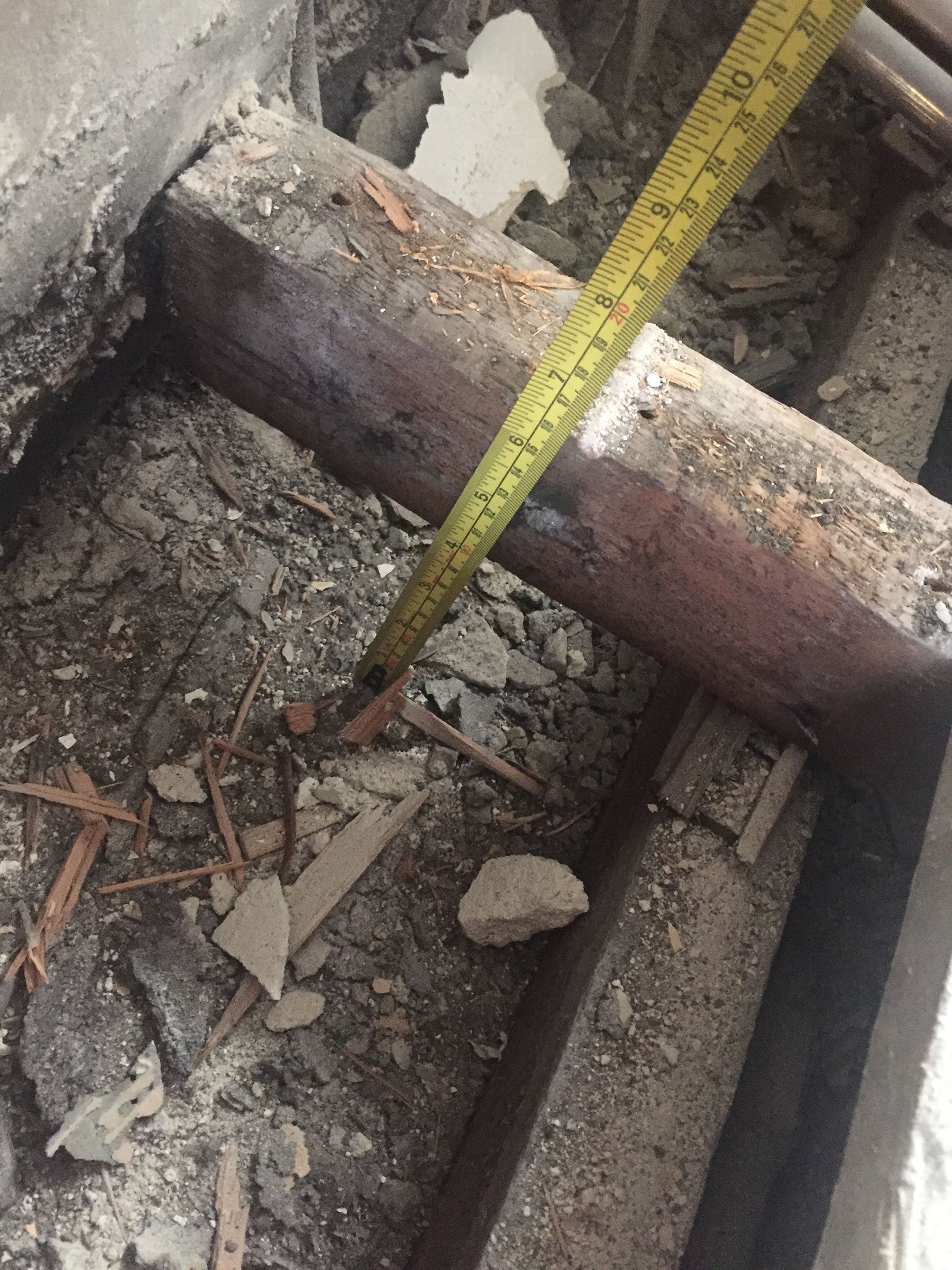 Establish the void depth below floor finish in order to determine how far you can extend drainage runs.

Key to any development in a mansion block is gaining a good understanding, from the go, of the existing services provision to the flat. This is particularly important if your goal involves revisiting the layout of the flat. If, for instance, you are looking to provide a bathroom or kitchen in a location where one does not currently exist, then you need to consider how this will be serviced. How will it connect to existing drains? How will water be supplied and how will it be ventilated?

You ideally want to find a solution that relies on gravity as opposed to mechanical processors such as pumps and waste macerators. These can be noisy, prone to breaking down and often disliked by landlords/ freeholders (but more on freeholder consent later).

Assuming that you are avoiding bolt on solutions such as those touched on above, you need to consider drainage runs to connect new WC’s to existing drains. These should be kept as short as possible as they will need to achieve a minimum gradient to facilitate flow.

In this respect it is also key to understand what void depth is available below the floor finish as this will determine how far you can run drainage routes. A common solution to gain greater distance involves raising floor levels by a step in certain areas of the flat in order to accommodate drainage runs. As long as you have identified the need for this early on in the design process this can be considered and properly integrated into the overall design of the flat.

Finally, during the works themselves, it is likely that your contractor on site, in conjunction with service providers (eg electricity) will need to temporarily shut down certain services to the entire building whilst upgrading services to your demise. This requires coordination with the managing agents for the building and is likely to add to overall expenses.

There will of course be limits to the amount of structural supports/ walls that can be removed and to the length of clear spans that can be created. This will depend on a multitude of factors; eg the construction type of the building, the extent of supported structure in flats above, existing structure and layout of flats below etc.

Where supporting walls are removed to create larger open spaces, these need to be replaced with some form of supporting structure. More often than not this new structure will be in the form of steel beams or ‘picture frames’. Steel generally allows for the slimmest and hence, concealable, solutions. It also tends to be the most cost effective. However, other materials can also perform structurally; timber and concrete for instance. The latter two will generally need to be deeper sections that cannot easily be concealed. As long as you have the headroom this could be an opportunity to expose materials intentionally that become a defining feature of the space.

The adjacent drawing is an example of a bespoke steel ‘picture frame’ solution we applied to a recent project in a Marylebone mansion block where a large portion of supporting wall was removed. The frame consists of a horizontal beam at ceiling level supported on posts at either end. The posts, in turn rest on a horizontal beam on the floor slab that spreads the load and transfers it on to the existing structure below (in the same way the removed wall did).

In the above example the beams are made up of a number of bespoke box sections that fit together to form the beam. Breaking the beam up into a number of component parts allows it to be carried upstairs to site where it is then assembled in situ (when site is on the 3rd floor of a mansion block you need to think about the logistics of how large and heavy steel sections are delivered safely).

This box section is of squat proportions and the beam is effectively only 12.5cm deep. This enabled us to conceal the beams within the floor and ceiling voids without the need for any bulkhead/ nasty downstands in the ceiling. Key – in order to avoid unsightly boxed out 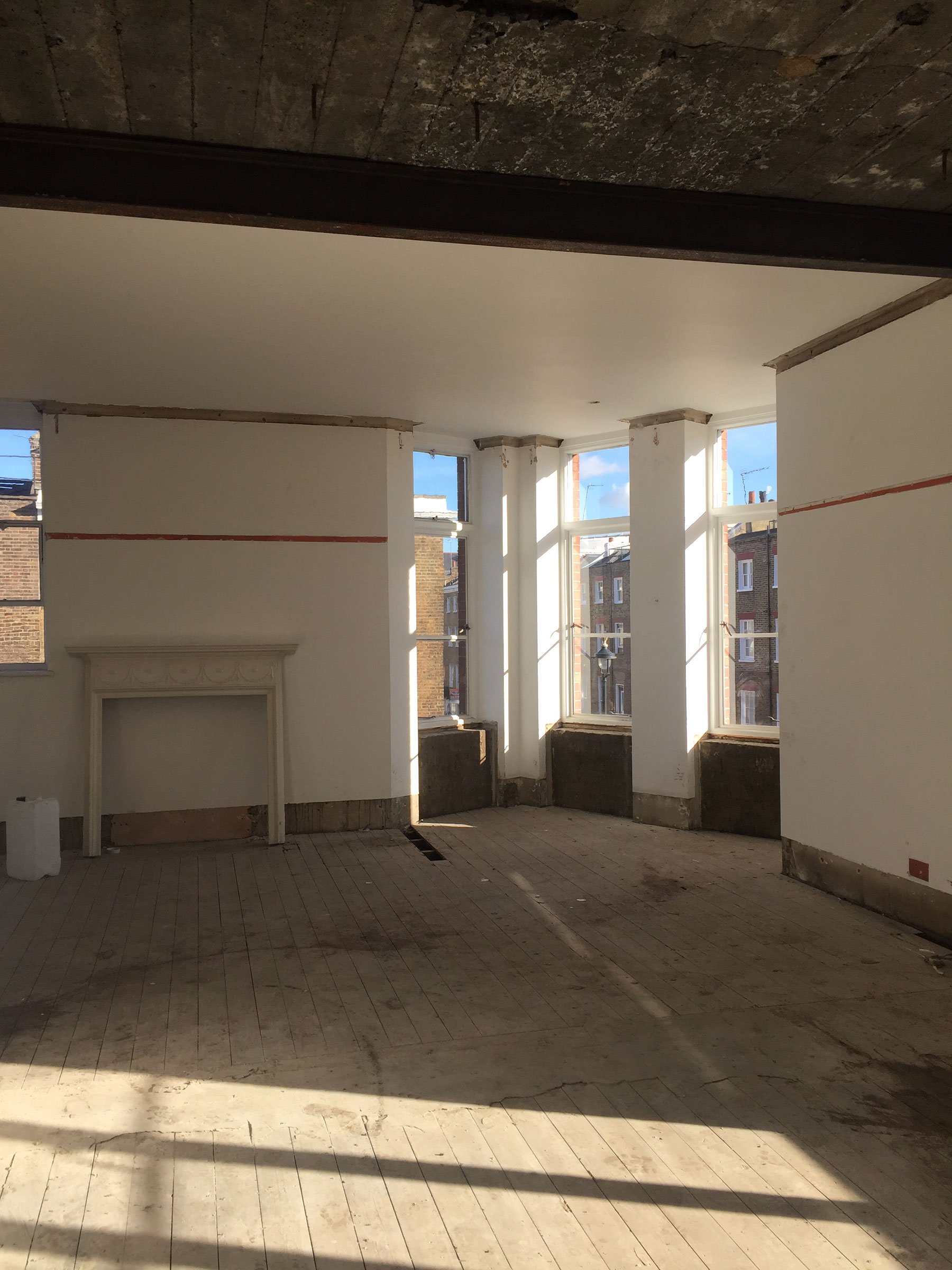 Clinker concrete ceiling exposed during the strip out to Collector’s Flat, Marylebone.

When you purchase a flat in a mansion or shared block you are likely to either own the leasehold or a share of the freehold. In either of these cases you will be required to apply for consent to most changes and modifications to the flat. In the event you are a leaseholder you will apply to the Freeholder. In the event that the freehold is shared by all or a number of property owners in the block there will be a committee that represents the common interest of the ‘freeholders’. The committee will normally have appointed a building management company to deal with the day to day running of the block and report to the committee. In applications for freeholder’s consent the management company tend to appoint a surveyor who will review your proposals and report back to and advise the committee.

You will need to submit reasonably detailed information for the consent and, depending on the scope of your proposed works, be prepared for what can often be a slow process. The process will broadly adhere to the following lines:

The above process has the potential to drag on and, with substantial proposals for alterations, 6 months is not unheard of. To avoid unnecessary delays it is advisable to try and establish, as early on as possible, whether there are any key issues for the landlord, items that will not be acceptable, particular details that are required (for instance around noise and fire separation). Work these in to your information from early on. You want to avoid a scenario where the surveyor submits his report to the committee with areas of concern as you will then be scrambling to redesign contentious details or issues. Try and establish a rapport with the surveyor from day one so that there are no surprises later on down the line.

The page you requested could not be found. Try refining your search, or use the navigation above to locate the post.